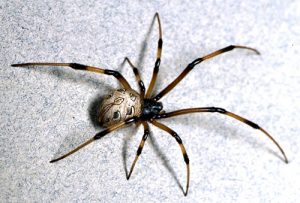 The Brown Widow Spider is a cosmopolitan tropical and subtropical spider having established populations in Hawaii, Florida, some Caribbean Islands, parts of Australia, South Africa, Japan, and Cyprus.  In North America, the Brown Widow Spider was restricted for many decades to the Florida peninsula.  However, around the year 2000, it started showing up in other Gulf Coast states.  Brown widows are now known from Texas to Georgia and South Carolina. You must take the help of Orlando Pest Control to get rid of them. But before you call them, it’s best to know a little bit about these critters.

This article gives you a detailed account of the life of the Brown Widow Spider, which can help you with their eradication.

If you have specific questions about Silverfish, check out our FAQ section.

Unlike its starkly black-and-red colored relative, the black widow, the coloration of a brown widow consists of mottling of tan and brown with black accent marking.  In mature females, there is usually a dorsal longitudinal abdominal stripe and three diagonal stripes on each flank.  At the top of each diagonal stripe, there is a black mark, which is rather conspicuous and square-ish.  The Brown Widow Spider does have an hourglass, but it is typically an orange shade rather than the vivid red of a black widow. The brown widow looks similar to immatures of the western black widow spider, the latter of which has smaller black spots on the top of the diagonal abdominal stripes and more olive-grey background coloration.

The brown widow builds its web in secluded, protected sites around homes, and woody vegetation with branches.  Some typical sites selected by brown widows for web building are empty containers such as buckets and nursery pots, mailboxes, entryway corners, under eaves, storage closets and garages, recessed hand grips of plastic garbage cans, undercarriages of motor vehicles that are stationary for long periods, and the undersides of outdoor furniture and wrought-iron railings. They choose places that are more exposed than sites chosen by black widows and hence, appear to be at higher risk for interactions with humans as bites are concerned.

As of 2012, researchers at the University of California, Riverside, suggested that the brown widow spider, newly established in Southern California, maybe displacing black widow spiders from the region, competing and/or fighting for territory. While certainly not definitive, this evidence does suggest that the brown widow is likely to be more hostile and aggressive towards its relative, the black widow, than the black widow is towards it. If that proves to be true, humans may be positively affected since brown widow bites are less toxic than those of black widows, thus posing less of a threat as they displace black widows over time.

Spiders have three stages in their life cycle: egg, spiderling, and adult. After mating, the female lays about 80 eggs and surrounds them with thick silk to build an egg sac. A few days later, the spiderlings hatch from the eggs. They feed on insects trapped in the web and on each other. As spiderlings eat and mature, they outgrow their skin, grow a new skin layer, and shed the old one, a process called molting. Spiders molt throughout their lives. Spiders can reproduce once they reach adult size. Female brown widows reproduce continuously and can make about 20 egg sacs over her lifetime. The web often has several eggs sacs of different ages, developing at the same time. The egg sac of the brown widow has spiny protrusions, compared to the smooth egg sac of the black widow.

The webs of brown and black widow spiders are made from sticky silken fibers, irregularly shaped, tangled, and constructed in hidden and protected locations. The webs can be found in dense woody plants, in empty containers, under buckets and pots, mailboxes, and under outdoor furniture. They are usually not found inside buildings. They choose more exposed sites than those chosen by black widows, which may increase their interactions with humans. A sighting of the spider is an indication of an infestation.

Brown widow bites have a milder effect than black widows, possibly because the brown widow does not have or cannot inject as much venom as its larger relative. Symptoms of a brown widow bite are similar to most spider bites: pain at the bite site and a red mark. Although its venom is as potent as black widow venom, the brown widow probably doesn’t inject very much venom, making it much less dangerous. Brown widows are shy and tend to avoid contact with humans. Females are not aggressive, make no effort to attack, and prefer to retreat or lie perfectly still. When confronted or provoked, however, they will bite. If bitten, place a cold pack on the bite to relieve the pain and seek medical attention immediately.

Brown Widow Spiders are not easy to get rid of, they are hard to detect and even harder to eradicate. These are the reasons that professional help from Orlando Pest Control is recommended when dealing with Brown widow Spiders. All American Pest Control gives the best Pest Control packages in Orlando! You can reach them at (321) 559-7378.

They have a pretty long lifespan ranging from 1 to 2 years.

What does Brown Widow Spider eat?

Brown Widow Spider can bite humans if they are provoked. Their bite is poisonous.

Yes! They have a venomous bite that can cause neurotic reactions in some cases.

How can I get rid of Brown Widow Spiders?

Brown Widow Spiders can be difficult spiders to get rid of! Call an exterminator. All American Pest Control is the best Orlando Pest Control company! You can call them at (321) 559-7378.

Are you seeking a Professional Pest Control solution?